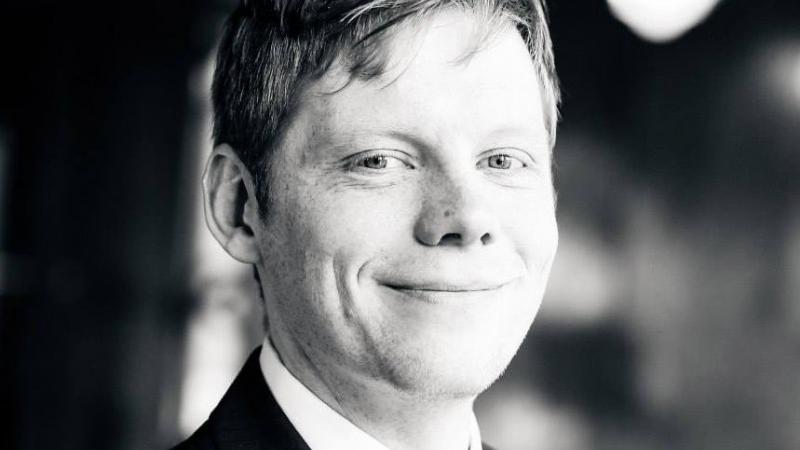 James (Jimmy) Thostensen, PhD, is one of two winners of the 2019 Outstanding Dissertation Award conveyed by Duke University’s Pratt School of Engineering’s Department of Electrical and Computer Engineering. Thostensen shared more about his research, his experience as a graduate student at Duke, and a change in mindset that made all the difference.

I was interested in energy research. As part of the Nanomaterials and Thin Films Lab, directed by Jeff Glass, PhD, MBA, and the Center for WaSH-AID, co-directed by Glass and Brian Stoner, PhD, I became involved in the Reinvent the Toilet Challenge funded by the Bill & Melinda Gates Foundation.

We wanted to create an energy efficient toilet – one of the requirements of the challenge – so we put a microscope on the liquid processing side to see where energy was being spent. We were using electrodes to disinfect the blackwater – the waste water from toilets – and there were two challenges. The first was that the electrodes were more or less perpetually on, which was inefficient, and the second was that we were not meeting water quality standards for disinfection.

When I came on board, with the help of Glass, Stoner, Edgard Ngaboyamahina, PhD, MBA, Katie Sellgren, PhD, Brian Hawkins, PhD, and everyone else in the lab, we started to look at different electrode materials and different ways to disinfect the bacteria present in blackwater. We had been trying to kill bacteria with chlorine and chlorine only. We knew we needed to generate other biocidal oxidants – oxidizing agents that go into water – to seek out bacteria and inactivate them, usually by breaking down cellular walls on the pathogen. Chlorine was doing that for some, but not all the species borne into blackwater, such as helminth eggs.

We considered other modes of disinfection, such as ultrafiltration, UV light, and heat, but to make it work for the goals of the Toilet Challenge, we knew we needed to stay in electrochemistry. We turned our focus to hydrogen peroxide. If you generate decent concentrations it can be even better than chlorine at killing off pathogens and it does not linger – it breaks down in water with light – meaning there is no lingering pollution if the water is reused or discharged.

We started looking at other possible electrodes to generate hydrogen peroxide, including boron-doped diamond electrodes, and wanted to know if it would be possible to use them efficiently. To date, most researchers had been applying a voltage on electrodes and blasting water with a steady current until everything was disinfected. We knew there were more efficient methods of doing this and started trying to generate hydrogen peroxide through different modalities.

At this point, I asked kind of a dumb question: “Why don’t we flip the switch more often than leaving it on?”

Rather than maintaining a continuous voltage, actually cycling the voltage had a catalytic effect. Flipping the switch between particular positive and negative voltages for certain periods of time produced more hydrogen peroxide than leaving the switch on continuously. We learned that this catalytic effect was a benefit to producing not only hydrogen peroxide, but also chlorine. We were able to lower the energy costs of disinfecting blackwater and meet the water quality standards.

Attending Duke was like winning the golden ticket to the Willy Wonka Chocolate Factory.

At Duke, if you have a really good idea, there are supports in place for you to check it out. There are also opportunities to learn more about specific subjects within your discipline, attend conferences, and participate in workshops to help you round yourself out as a professional. I sat in on grant-writing workshops and heard from alumni who shared what it’s like to work for companies, government labs, startups, consulting agencies, and academic institutions across all sorts of professional roles.

I also took classes at the Duke Innovation Co-Lab maker space. They have 3D printers for rapid prototyping, CNC routers, and laser carving machines. They started offering short-courses in multiple computer languages so if you wanted to learn more about programming you could go there for classes. I don’t know of any other school that has so many opportunities of this kind.

The Value of Not Knowing

As a graduate student, you may enter with an impostor syndrome and that can manifest in one of two ways. You may think that you need to maintain this lie so when you don’t know things you try to muscle your way through. You don’t ask questions and inadvertently become the person who constantly messes up. That can be a miserable experience. Alternately, you become overly apologetic for messing up. In both cases, you have limited personal growth. What matures you as a graduate student is the realization that it’s okay to not know everything. It’s okay to ask questions even if you think you should know the answer.

During my research, I asked what seemed like a really basic question at the time, and it led to three dissertation chapters, three publications, and a lot of really interesting insights.

Everyone is here to learn, and asking questions can lead to unexpected discoveries. If I had been able to get over the impostor syndrome sooner and felt more comfortable not knowing things, I may have finished sooner or asked even more interesting and impactful questions. It’s a big hurdle, but for any new graduate student, the sooner that you can get over feeling like an impostor, the sooner you can grow as a scientist.

I want to thank my colleagues and mentors in the lab, especially Glass and Stoner. I also want to recognize the other Outstanding Dissertation Award Winner, Mohamed Saber Rizk Ibrahim, and Tamara Silbergleit Lehman, who won the outstanding Service to the Department Award.

For next steps, I’m looking at a couple opportunities. I fell in love with research and this project and would love to continue to do research. In terms of projects, I would like to stay in energy and materials. We’ll see who lets me continue to ask dumb questions.