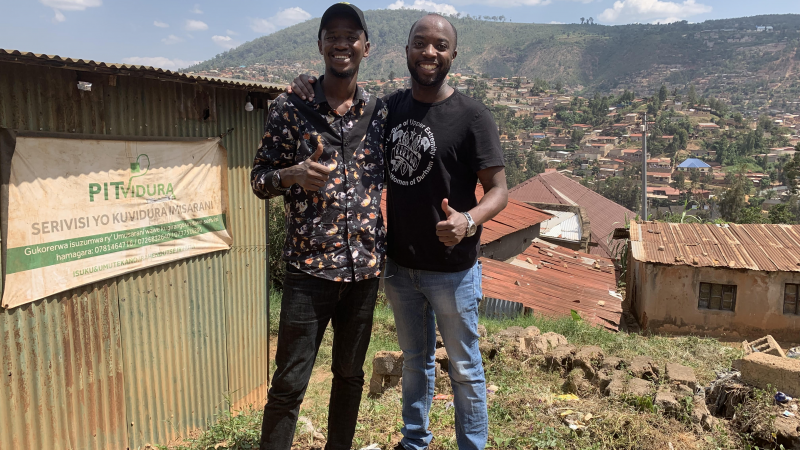 For Research Scientist Edgard Ngaboyamahina, PhD, MBA, the path to building local capacity in his home country of Rwanda started with, of all things, a two-day trip to Indianapolis. We sat down with Edgard to learn more about his work at the Center for WaSH-AID, his newly formed company Simbuka, and the story of his homecoming after being away for almost 30 years.

I am a researcher at the Duke University Center for Water, Sanitation, Hygiene and Infectious Disease (WaSH-AID), where we facilitate the development and deployment of novel, sustainable, technology-based health solutions for resource-constrained regions around the world.  We focus on sanitation technologies and support the transfer of technologies to countries around the world. I recently created Simbuka Technological Innovation, a company connecting researchers developing technologies with local partners in Rwanda and neighboring countries.

Simultaneously, I reached out to Pr. John Musiine, President of the United States Rwandan Community Abroad (USRCA).  He invited me to Indianapolis to attend a first-ever conference organized by the USRCA for young professionals of the Rwandan community living in the United States. The goal was to explore how we could support Rwanda’s economic development. Speakers included the Rwandan Prime Minister, Edouard Ngirente, the Rwandan Ambassador to the United States, Mathilde Mukantabana, and delegates from the Rwanda Development Board (RDB).

While at the conference, I shared my vision for transferring technologies and building local capacity in Rwanda as a cornerstone of the country’s long-term sustainability. I met with several members of the RDB and they invited me to Rwanda to meet with funding agencies and to speak to university students. A journalist who heard my talk also invited me to appear on a local television show to discuss WaSH-AID and Simbuka. Brian Stoner, PhD, WaSH-AID’s ’s co-director, supported the trip, and what at first seemed like a lark turned into a 10-day itinerary.

The first emotion I felt was happiness. Our flight arrived at night, and as we approached Kigali, I saw lights. The closer we were to landing, the more lights I saw – many more than I had seen in previous visits to other parts of Africa. Light means electricity, and electricity means life. I also remembered the fragrant air.  As soon as the plane door opened, the warm, floral air reminded me of my childhood.

I thought I had one cousin in Rwanda, but it turns out I have many. Some speak Kinyarwanda, the official language of Rwanda, others French and still others English. I speak French, English, and very little Kinyarwanda. We spent many hours switching between the three languages as we caught up and it worked surprisingly well.

The first order of business was a lecture at the University of Rwanda College of Medicine and Health Sciences. I left the hotel 30 minutes before the talk, but due to traffic, arrived less than five minutes before the scheduled start.  And of course, because technology glitches are universal, the HDMI cable I had didn’t work. Thankfully, we found a replacement. The attendees had terrific questions. They expressed concern about the environmental and health consequences of ineffective WaSH management and were eager to explore possible solutions.

As soon as the lecture wrapped up, I received a text from the television journalist asking if I could come to the studio at 7 a.m. the next morning for the live taping of Waramutse, the national broadcast news show.  Oh, and by the way, he mentioned, the conversation would be in Kinyarwanda. He texted me the questions, and I, along with another cousin, spent much of the evening writing out answers in Kinyarwanda. I then woke up at 3 a.m. to practice. I was nervous, as my Kinyarwanda was not strong. I had been speaking informally since arriving and with enough preparation, I told myself, it would be okay.

As a musician and a singer in a previous life, I have been on stage numerous times and am comfortable with public speaking. However, a live TV event without a studio audience felt different. When the host, Andrew Kareba, started the show, he spoke fast - very fast.  I tried to keep my cool and remain professional, glancing between Andrew and his co-host, Michelle Iradukunda. He turned to ask me the first question and I went completely blank.  After a few garbled responses, Andrew laughed and mercifully switched to English.

The rest of the visit involved follow-up meetings with Pr. Musiine, the RDB, and various NGOs working in the sanitation space in Rwanda.  On the last day, I met a colleague and friend, Tate Rogers, from Triangle Environmental Health Initiative, also based in Durham, who happened to be in Rwanda. We spent the day with engineer Regis Birori, from the social enterprise Pit Vidura. Pit Vidura empties pit latrines in Kigali’s low-income communities.  “Ditch the suit jacket and dress shoes,” Tate advised the night before.

Rwanda is mountainous, and in Kigali, emptying trucks often have difficulty maneuvering the crowded streets to reach households. Manually emptying pit latrines is forbidden. Pit Vidura offers a safe and affordable alternative to these practices and uses novel pumping technologies and improved work pracctices to empty the sludge quickly, safely, and affordably. However, before pumping can begin, any items that have been tossed into the pits (trash, shoes, menstrual hygiene waste) have to be "fished" out to prevent the pumps from clogging.

It was a hot day and the team, wearing personal protective gear, worked unbelievably hard. They "fished" out the latrines, dropping whatever they found into 50 kg barrels, and then carried these barrels to the truck, which was sometimes up a hill or quite a distance from the latrine. They then used the pump to remove the fecal sludge. With Rwanda’s geography and density, the country is an ideal location for compact, decentralized sanitation solutions, and at least among those I spoke with, there is interest in leapfrogging expensive and antiquated sewer systems and adopting new technologies.

I returned from the trip optimistic. Rwandans are eager to learn and adapt. They seek to embrace technology and understand that doing so will contribute to long-term prosperity. As a country without extensive natural resources, their intellectual talent is their strength. I am excited to work with local government, businesses, and entrepreneurs, and seek partners who equally are committed to a vision of a progressive, prosperous, sustainable Rwanda.  If you are interested in learning more, please contact me at edgard.ngaboyamahina@duke.edu.